Feast of the Annunciation from 2009

Today the Archangel Gabriel knocked on the door to Our Lady’s immaculate heart, announcing the forthcoming nativity of Our Lord. The Queen answered, “fiat; let it be done unto me.”

And with that God was made man. And God would go on to suffer like man in so many ways. And God asked that we unite our sufferings with His.

Friends, until we can join again in Orate Fratres, here are some images from this Feast Day back in 2009, at St Stephen Church. We were lucky to find these in our computer folder. Mass was celebrated at the side altar of the Blessed Virgin Mary, by Fr Franz, who was pastor of the parish at that time. 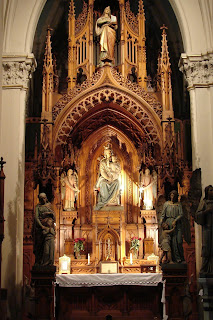 BVM Side Altar, St Stephen Church
Feast of the Annunciation, 2009 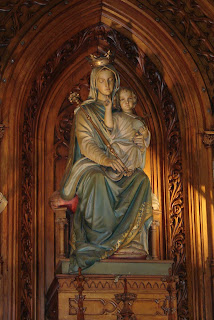 Closeup of the BVM 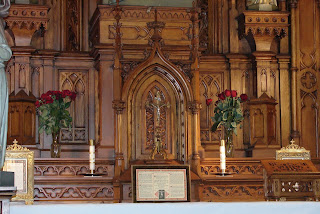 Closeup of the Altar 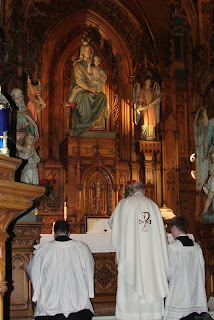 The Traditional Latin Mass seems to be a hot topic for pastors to provide to the faithful. Fr. David Ireland, pastor of Sacred Heart of Jesus parish in South Euclid, OH, dropped us a note asking that his recorded TLM for today be posted.

Fr. Godic's Advice for All of Us

The Holy Sacrifice has been suspended from all public celebration because of Covid-19, the coronavirus. Faithful Catholics are suffering. The sacraments are out of reach. Will the faith deteriorate or grow?

Fr. Frank Godic, pastor of Immaculate Conception in Cleveland, OH, has comforting words and actions for us. From establishing a live stream of Holy Mass from his parish, to the edifying story of his patron, St. Francis Xavier, Fr. Godic gives us reason to be confident that we can get through this most difficult period in our time. If you haven't already, kindly subscribe to the blog and our YouTube channel. Traditional Catholic media needs all the help it can get. Be generous to other outlets too. *Please take particular note: the live stream Mass from Immaculate Conception is NOT a project of Cleveland TLM Friends. We have been contacted with questions about it that, unfortunately, we cannot answer. "Please address questions, comments and corrections to:  info@propria.org " -taken from the website https://propria.org/, which is responsible for the live stream and link www.holysacrifice.org

The Cleveland TLM community is being blessed with the best possible way of continuity during this terrible reality. It was important to not allow this suspension of Masses to have a complete interfere with the greatest thing happening in northeast Ohio. The Traditional Catholic movement is too important to so many families and individuals.

The live stream is from Immaculate Conception, Cleveland. The broadcast schedule is planned for daily Mass.

We will be able to access it through www.holysacrifice.org.

***Cleveland TLM Friends is very thankful to the faithful Catholics who put this together. 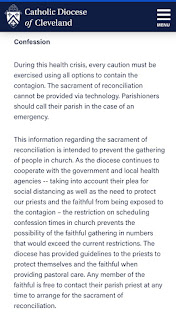 Our Friends at St Sebastian in Akron would like you all to know about a TLM workshop they will be hosting later this month. See the image below. 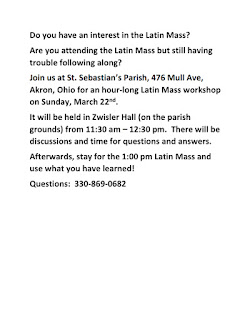 Posted by Servus Tuus at 6:56 AM No comments:

Modernity portrays itself as an intelligent era with degree'd learned men, whilst keeping Truth blurred and unfocused. 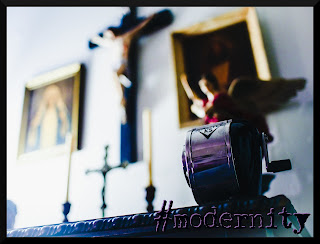 “This simple wisdom of a Catholic mother far surpasses the sterile intellectualism of the new Pharisees and scribes, who are represented by the liberal and neo-Modernist clerical clan in the life and structures of the Church in our day.” —Bp Athanasius Schneider, Christus Vincit

Thanks to a Friend on Twitter for getting this out. The Basilica of St John the Baptist in Canton, OH, will be offering a TLM low Mass on the Saturdays of Lent. As stated in their bulletin, a group of parishioners joined together to petition for this Mass to be available. A stable group and a pastor of good will. 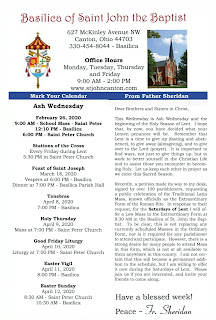 Posted by Servus Tuus at 9:06 AM No comments:

Let us pray for the Holy Father, Pope Francis

Let us pray for Francis, our Pope.
May the Lord preserve him, and give him life, and make him blessed upon the earth, and deliver him not up to the will of his enemies. Amen.

TLM in the Diocese of Cleveland