Feast of the Assumption of the Blessed Virgin Mary, Aug 15, 2011

The Assumption of the Blessed Virgin Mary
(Taken from "Treasury of Novenas" with Meditations by Rev. Lawrence G. Lovasik, S.V.D.)

The Blessed Virgin Mary obeyed the law of death, but her death was rather a peaceful slumber, a gentle separation of the soul from the body. Her soul reached such a degree of love that it seemed unable to rest any longer except in the blissful embrace of the Blessed Trinity. It left her immaculate body and sped to enjoy the blessed vision of God. But soon her beautiful soul was again united to her body which lay peacefully in the tomb, and suddenly Mary stood immortal and glorified, clothed in queenly glory.

As angels sang their hymns of praise, Mary was raised on high to the Kingdom of glory by God's own power. Who can tell the joy of that loving embrace whereby Jesus welcomed and admitted His own Virgin Mother to unending union with Him in the glory of heaven!

Mary's peaceful tomb had been opened by the Apostles and found to be empty. Tradition tells us that beautiful flowers filled the place where her body had once lain, and heavenly music enveloped her empty tomb. The Apostles then realized that she had been taken up into heaven, soul and body.

It was fitting that Mary should be assumed into heaven with soul and body. By her Assumption, God honoured her body that was always the temple in which He dwelt by grace. It was a gate through which the Son of God, the Divine Word, passed to earth and became Man.

It was fitting that Mary's holy and virginal body which gave flesh and blood to the God of all sanctity, the Victor over death, should never experience the corruption of the grave. Death and corruption are a result of original sin; but by her Immaculate Conception Mary was preserved from original sin and its effects.

Mary offered herself to suffering and her beloved Son to death for the redemption of mankind; it was fitting that she should be united with Him in glory.

We should rejoice that after years of suffering on earth, Mary has at last been taken to the throne prepared for her in heaven where she reigns with her Son. The Church expresses this joy on the solemn feast of the Assumption of the Virgin Mary, August 15, which is also a Holy Day of Obligation.

This year, in the Diocese of Cleveland, the Feast of the Assumption is not a Holy Day of Obligation, but that doesn't mean the day can't be reverenced with pious acts of devotion. 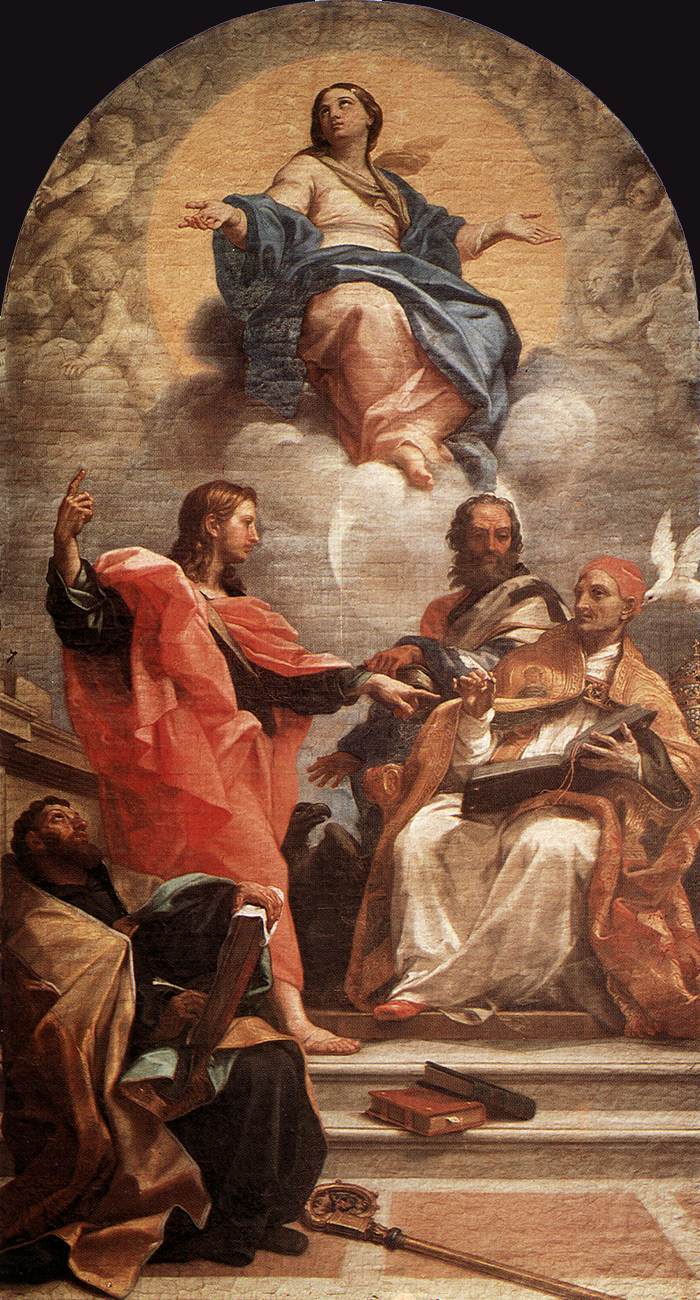 
Mary, Queen Assumed into Heaven,
I rejoice that after years of heroic martyrdom on earth, Thou hast at last been taken to the throne prepared for Thee in heaven by the Holy Trinity.

Lift my heart with Thee in the glory of Thy Assumption
above the dreadful touch of sin and impurity. Teach me how small earth becomes when viewed from heaven. Make me realize that death is the triumphant gate through which I shall pass to Thy Son, and that someday my body shall rejoin my soul in the unending bliss of heaven.

From this earth,
over which I tread as a pilgrim, I look to Thee for help. I ask for this favor:

When my hour of death has come,
lead me safely to the presence of Jesus to enjoy the vision of my God for all eternity together with Thee.

We will also be sending out daily email reminders with particular novena prayers for the day. Check your inbox and the blog.
Posted by Servus Tuus at 10:03 PM