Immaculate Conception in Willoughby, Ohio, which has been offering the Traditional Latin Mass on Friday evenings, has announced on its website, under the leadership of the new pastor, that the Latin Mass on Fridays at 7:30pm is suspended, "effective immediately."

For those who don't know or may have forgotten, New Year's Day is an holy day of obligation for Catholics. In the traditional calendar, it is the Feast of the Circumcision of Our Lord. The Traditional Mass schedule is below.

Sacred Heart of Jesus parish in South Euclid will offer High Mass on Sunday, December 29, 2013 at 5pm, the Sunday within the Octave of Christmas. There will be a commemoration of St. Thomas Becket.

Posted by Servus Tuus at 6:00 PM No comments:

A very merry Christmas to you all!

Posted by Servus Tuus at 2:13 AM No comments:

St. Stephen Church will celebrate their patronal feast on Decemeber 26 at 6:30pm. The Mass will be Solemn High.


St. Stephen was the first deacon and first martyr of the Church. St Fulgentius of Ruspe helps us to reflect on St. Paul's role, before and after his conversion, in the martyrdom of St. Stephen.

...Strengthened by the power of his love, [Stephen] overcame the raging cruelty of Saul and won his persecutor on earth as his companion in Heaven. In his holy and tireless love he longed to gain by prayer those whom he could not convert by admonition. Now at last, Paul rejoices with Stephen, with Stephen he delights in the glory of Christ, with Stephen he exults, with Stephen he reigns. Stephen went first, slain by the stones thrown by Paul, but Paul followed after, helped by the prayer of Stephen. This, surely, is the true life, my brothers, a life in which Paul feels no shame because of Stephen's death, and Stephen delights in Paul's companionship, for love fills them both with joy. It was Stephen's love that prevailed over the cruelty of the mob, and it was Paul's love that covered the multitude of his sins; it was love that won for both of them the kingdom of Heaven.


Good King Wenceslaus looked out on the Feast of Stephen,
When the snow lay round about, deep and crisp and even.
Brightly shone the moon that night, though the frost was cruel,
When a poor man came in sight, gathering winter fuel.

“Hither, page, and stand by me, if you know it, telling,
Yonder peasant, who is he? Where and what his dwelling?”
“Sire, he lives a good league hence, underneath the mountain,
Right against the forest fence, by Saint Agnes’ fountain.”

“Bring me food and bring me wine, bring me pine logs hither,
You and I will see him dine, when we bear them thither.”
Page and monarch, forth they went, forth they went together,
Through the cold wind’s wild lament and the bitter weather.

“Sire, the night is darker now, and the wind blows stronger,
Fails my heart, I know not how; I can go no longer.”
“Mark my footsteps, my good page, tread now in them boldly,
You shall find the winter’s rage freeze your blood less coldly.”

In his master’s steps he trod, where the snow lay dinted;
Heat was in the very sod which the saint had printed.
Therefore, Christian men, be sure, wealth or rank possessing,
You who now will bless the poor shall yourselves find blessing.

This is a good carol to tell your children, and perhaps they will remember Good King Wenceslaus upon seeing footsteps in the snow.

And as St. Stephen was the first deacon, his feast day is a good time to charitably give food, money and other useful items to service workers and the poor. 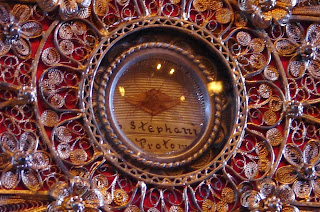 Posted by Servus Tuus at 8:00 PM No comments:

The 12 noon Christmas Day Mass at Immaculate Conception will be Low Mass, not High.

St. Sebastian in Akron will offer High Mass at 1pm on Christmas Day.
Posted by Servus Tuus at 4:58 PM No comments:

A blessed remainder of Advent to all.

Here is the schedule of Christmas Masses.

Posted by Servus Tuus at 6:58 PM No comments:

The Rorate is a Mass in honor of Mary in which the interplay of light and darkness convey the meaning of Advent. Historically, it has been celebrated early on weekday mornings in darkness. As the Mass proceeds and sunrise approaches, the church becomes progressively brighter.
Posted by Servus Tuus at 10:36 PM No comments:

Please see the flyer below for a very special event at Sacred Heart of Jesus in South Euclid, Oh. 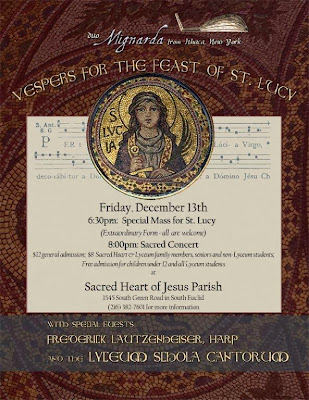 Posted by Servus Tuus at 4:14 PM No comments:

The modern world has erased the spirit of Advent. Faithful Catholics are bombarded with the spirit of commercialism. We no longer patiently await the coming of Our Lord Jesus Christ. Christmas time begins the day after Thanksgiving and ends the day after Christmas. It is time to embrace the Church's calendar, not the world's. These are the themes discussed in this powerful sermon on Audio Sancto.

Click the link below to listen to the sermon (mp3 format).
Live the Advent Season - Patience