Feast of the Exaltation of the Holy Cross, St. Stephen's

St. Stephen's will offer High Mass on the Feast of the Exaltation of the Holy Cross, Wednesday, September 14, 2011. Mass will be at 6:30pm. 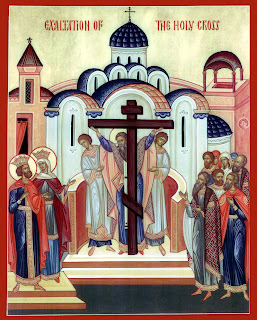 
"Never had Satan's pride met with such humiliation as when he saw the instrument of our perdition made the instrument of our salvation. As the Church expresses it in her Preface for Passiontide: 'He that overcame mankind by a Tree, was overcome by a Tree.' Thus foiled, he vented his fury upon this saving Wood, which so bitterly reminded him both of the irresistible power of his conqueror and of the dignity of man who had been redeemed at so great a price. He would fain have annihilated the Cross; but knowing that this was beyond his power, he endeavored to profane it, and hide it from view. He therefore instigated the Jews to bury it. At the foot of Calvary, not far from the sepulchre, was a deep hole. Into this was the Cross thrown, together with those of the two thieves, the Nails, the Crown of Thorns, and the Inscription or Title written by Pilate. The hole was then filled up with rubbish and earth, and the Sanhedrin exulted in the thought of its having effaced the memory of the Nazarene, Who could not save Himself from the ignominious death of the Cross. Forty years after this, Jerusalem was destroyed by the Romans, the instruments of God's vengeance. The Holy Places were desecrated by idolaters. A small temple to Venus was erected on Calvary, and another to Jupiter over the Holy Sepulchre. By this, the pagans intended derision; whereas, they were perpetuating the knowledge of two spots of most sacred interest."