Friday, January 6, is the Feast of Epiphany. In place of St. Stephen's regular First Friday low Mass, high Mass will be offered at the same time, 6:30pm, followed by Benediction.

Traditionally, on the Feast of the Epiphany, the priest, wearing white vestments, would bless the Epiphany water, frankincense, gold, and chalk. Chalk is used to write the initials of the three magi over the doors of churches and homes. The letters stand for the initials of the Magi (traditionally named Caspar, Melchior, and Balthasar), and also the phrase Christus mansionem benedicat, which translates as "may Christ bless the house". According to ancient custom, the priest would announce the date of Easter on the feast of Epiphany. This tradition dated from a time when calendars were not readily available, and the church needed to publicize the date of Easter, since many celebrations of the liturgical year depend on it. 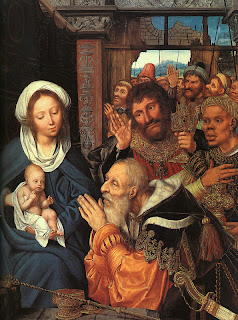