Solemnity of the Sacred Heart


"We the Christians are the true Israel which springs from Christ,
for we are carved out of His heart as from a rock."
-- St. Justin Martyr (d. 165)

The following is from an inspiring entry in the Catholic Encyclopedia, courtesy of New Advent.

It is in the eleventh and twelfth centuries that we find the first unmistakable indications of devotion to the Sacred Heart. Through the wound in the side the Heart was gradually reached, and the wound in the Heart symbolized the wound of love. It was in the fervent atmosphere of the Benedictine or Cistercian monasteries, in the world of Anselmian or Bernardine thought, that the devotion arose, although it is impossible to say positively what were its first texts or were its first votaries. To St. Gertrude, St. Mechtilde, and the author of the "Vitis mystica" it was already well known. We cannot state with certainty to whom we are indebted for the "Vitis mystica". Until recent times its authorship had generally been ascribed to St. Bernard and yet, by the late publishers of the beautiful and scholarly Quaracchi edition, it has been attributed, and not without plausible reasons, to St. Bonaventure ("S. Bonaventura opera omnia", 1898, VIII, LIII sq.). But, be this as it may, it contains one of the most beautiful passages that ever inspired the devotion to the Sacred Heart, one appropriated by the Church for the lessons of the second nocturn of the feast. To St. Mechtilde (d. 1298) and St. Gertrude (d. 1302) it was a familiar devotion which was translated into many beautiful prayers and exercises. What deserves special mention is the vision of St. Gertrude on the feast of St. John the Evangelist, as it forms an epoch in the history of the devotion. Allowed to rest her head near the wound in the Saviour's she heard the beating of the Divine Heart and asked John if, on the night of the Last Supper, he too had felt these delightful pulsations, why he had never spoken of the fact. John replied that this revelation had been reserved for subsequent ages when the world, having grown cold, would have need of it to rekindle its love ("Legatus divinae pietatis", IV, 305; "Revelationes Gertrudianae", ed. Poitiers and Paris, 1877).

These are the words of St. Bonaventure:


Because we are now come to the sweet Heart of Jesus, and because it is good for us to be here, let us not too soon turn away therefrom. O how good and joyful a thing it is to dwell in this Heart. What a good treasure, what a precious pearl, is thy Heart, O most excellent Jesu, which we have found hidden in the pit which hath been dug in this field, namely, in thy body. Who would cast away such a pearl? Nay, rather, for this same I would give all my pearls. I will sell all my thoughts and affections, and buy the same for myself, turning all my thoughts to the Heart of the good Jesus, and without fail it will support me. Therefore, o most sweet Jesu, finding this Heart that is thine and mine, I will pray to thee, my God : admit my prayers into the shrine of hearkening : and draw me even more altogether into thy Heart.

For to this end was thy side pierced, that an entry might be open unto us. To this end was thy Heart wounded, that in it we might be able to dwell secure from alarms from without. And it was wounded none the less on this account that, because of the visible wound, we may perceive the wound of love which is invisible. How could this fire of love better shine forth than for him to permit that not only his body, but that even his Heart, should be wounded with the spear? Who would not love that Heart so wounded? Who would not, in return, love one who is so loving? Who would not embrace one so chaste? Wherefore let us who are in the flesh love in return, as much as we can, him who so loveth, embrace our wounded one, whose hands and feet, side and Heart, have been pierced by wicked husbandmen ; and let us pray that he may deign to bind our hearts, still hard and impenitent, with the chain of his love, and wound them with the dart thereof. 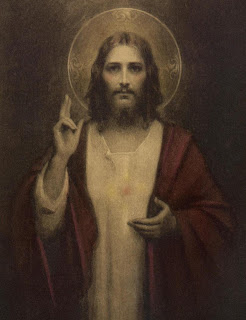 
The External Solemnity of the Sacred Heart, Sunday, June 9