Pride is an interesting concept in this month dedicated to the Sacred Heart, which, in effect, has been hijacked by those attached to the sodomitical revolution.

Is it unreasonable to expect that a culture of self-absorption would adopt the word “pride” to denote their devotion? And what might self-absorption have necessarily to do with sodomy? In short, it’s the root cause, so says St Paul.

In his letter to the Romans, St Paul addresses this very type of sin, and explains that it was the rejecting of God and focusing on self that delivered them up to their own shameful affections.

1:21 Because that, when they knew God, they have not glorified him as God or given thanks: but became vain in their thoughts.  And their foolish heart was darkened.

1:23 And they changed the glory of the incorruptible God into the likeness of the image of a corruptible man and of birds, and of fourfooted beasts and of creeping things.


How true! We worship ourselves. We believe animals to be equal, nay, even better than people.

1:25 Who changed the truth of God into a lie and worshipped and served the creature rather than the Creator, who is blessed for ever. Amen.

And St Paul goes on to describe the manifestation self absorption....

1:26 For this cause, God delivered them up to shameful affections. For their women have changed the natural use into that use which is against nature.

1:27 And, in like manner, the men also, leaving the natural use of the women, have burned in their lusts, one towards another: men with men, working that which is filthy and receiving in themselves the recompense which was due to their error.


St Paul concludes with a litany of all the sins which accompany this rejection of the Incorruptible God. It’s quite evident our generation suffers from this.

As we near the end of this month dedicated to the Sacred Heart of Humility Himself, pray especially hard for peace in our families, purity in children, conversion of sinners, justice upon criminals, purification of the Church, and while you’re at it, the reclaiming of the Rainbow. It’s rightfully God’s.


Apocalypse
10:1 And I saw another mighty angel come down from heaven, clothed with a cloud. And a rainbow was on his head: and his face, as the sun, and his feet as pillars of fire. 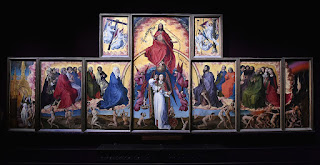